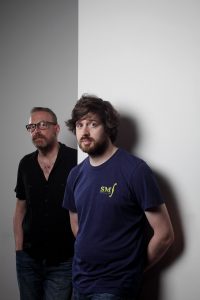 Two of the U.K’s finest and most prolific songwriters Kris Drever (BBC Folk Singer of The Year, Lau) and Boo Hewerdine (The Bible / Eddi Reader) tour together for the first time in over three years.

2018 finds both artists on top form, Kris having released his If Wishes Were Horses album and won BBC Folk Awards Best Singer award, Boo releasing his critically acclaimed Swimming In Mercury album and Seven song ” Letter To My Younger Self” EP, music which is widely considered to be the best work of each artist yet.

The duo started life with a successful tour in Spring 2015, releasing the limited edition Last Man Standing EP. Connected through song now for over a decade, when Kris approached Boo about his song “Harvest Gypsies” for Kris’ debut album “Black Water”, Drever and Hewerdine have more recently written new songs for BBC Radio 2’s Radio Ballads album and show. 2018 audiences can expect to hear many of their favourite songs from across both artists catalogues and some new songs played for the first time.