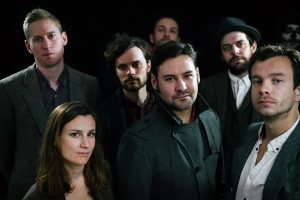 Originally from Bristol, Apple of my Eye formed in London in 2011 over a love of collaborative songwriting, harmony, storytelling and warm cider. They have since evolved into uproarious troubadours of London’s modern folk scene making deceptively sweet folk music.

Their new album “The Beast Below” tells the stories of small characters facing insurmountable odds and occasionally surviving.

“…one of the most exciting folk albums of the year so far.” – Folk Radio UK
“…a masterclass of storytelling through music.” — Songwriting Magazine
“A winning formula.” – FRoots