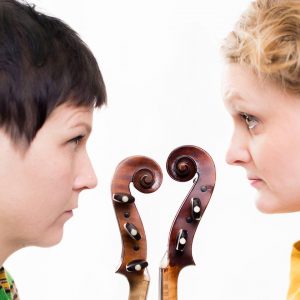 Emilia Lajunen & Suvi Oskala celebrated the five years of their acoustic five-string fiddle duo in 2016! The ensemble’s sound varies between fragile and rich and the duo has often been noted to sound like more than two instruments. All in all their music suites all sorts of venues and is also easy to dance to!

“The duo combines their familiarity with the tradition with a strong individual voice while, refreshingly, playing without too many frills. The focus is on the music; on drive and rhythm.” – Amanda Kauranne, Finnish Broadcasting company

Both players of Duo Emilia Lajunen & Suvi Oskala are of the very best Finnish folk fiddling can offer. Their repertoire consists of traditional Finnish fiddle tunes which the duo has arranged with a twist. Their music has been described as chamber music played rhythmically by two professional folk fiddlers. The latest additions to the duo’s repertoire are commission compositions by eg. Mikael Marin of Väsen and Johanna Juhola.

Since the release of their debut album ‘Tyttörinki’ in 2012 the duo has toured extensively in Finland and they have also performed abroad in Scandinavia, the UK, South Korea and India. Their second album ‘Piilokisa’ (‘A Hidden Frolic’) will be released by Nordic Notes in March 2018! The band will have copies of the album with them for pre-sales on their gig in London.