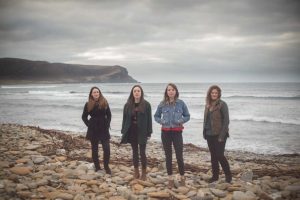 Following their debut release Cross the Line in 2016, Orcadian folk Quartet FARA are touring the UK to coincide with the October 2018 release of their second album. Comprised entirely of self-penned songs and instrumental tracks, FARA will celebrate the community which inspired them to become musicians – an album rooted in the spirit of the Orkney Isles and its people, it combines the unique Orkney fiddle tradition with contemporary and original songs and tunes.

With the mission of creating something entirely new and collaborative, the four members of FARA have co-written many of the melodies on the album, blending all four distinctively different musical voices together, whilst also celebrating the unity of their musical beginnings. The songs incorporate words by Orcadian poets: George McKay Brown, Edwin Muir and Christina Costie, as well as one original and one traditional text. The Orcadian imagery running through these songs, alongside new melodies brimming with the islands’ tradition whilst also pointing in new directions, celebrates the ever-expanding Orcadian folk tradition. Fara’s new album is set to excite and delight.

Allison Sleator is a contemporary and folk singer. She has performed and collaborated with legendary figures such as Ireland’s well-known producer, composer and renowned bouzouki player, Donal Lunny, founder of historic bands such as Moving Hearts, Planxty and The Bothy Band, singer songwriter Declan O’Rourke and world renowned Irish band The Chieftains, among others.