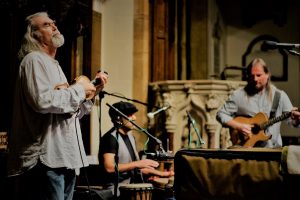 “Peter Knight’s Gigspanner were amazing. I can only think of a handful of folk musicians world-wide that have the kind of relationship with their instrument that Peter Knight has: Martin Hayes, Enda Scahill, Mike McGoldrick, John McCusker, Martin Simpson.
Many people as they trickled out into the night said that this was one of the best gigs they’d ever been to. I’d agree with that. If you get a quarter of a chance to see them, go – there were people there last night who had travelled many miles to be there. It was well worth every mile” Mike Harding : Broadcaster/Musician/Writer
**********

His departure from folk-rock pioneers Steeleye Span, has enabled fiddle player Peter Knight to turn his full attention to his trio Gigspanner, and in the process establish their reputation as one of the most genuinely ground-breaking forces on the British folk scene.
Unhindered by the limits of technical ability, they take self-penned material along with music rooted in the British Isles and with the flick of a bow, a finely chosen chord or slip of a beat, produce richly atmospheric arrangements layered in a wealth of subliminal musical influences “with notes seemingly plucked from the stars and rhythms from the equator”
What makes Gigspanner unique is the variety of musical colours on their palette. What makes them brilliant is how they blend them without ever muddying the landscape ~ Spiral Earth

The captivating nature of their set stems not only from their creative ability and vision, but the eclectic nature of the material chosen. There are eddies and undercurrents drawn from a whole palette of influences which serve to arrest and inspire.  Audiences remain engaged and curious to the closing notes…

2016 was a vintage year for the trio, with Peter receiving Fatea Magazine’s ‘Instrumentalist of the Year’ Award and ‘Best Musician’ in the inaugural folking. com Awards as voted for by the concert going public. Their album ‘Layers of Ages’ was included in many of the end of year ‘Best of ‘ lists, including The Telegraph, which gave the album a rare five stars.
On this tour, the trio will be launching their brand new studio album, The Wife of Urban Law.
The advent of Gigspanner has introduced a whole new audience to the extraordinary musicianship of Peter Knight, a violinist whom many consider to be in a league of his own. The late author Sir Terry Pratchett in praising Peter’s great gift wrote with typical lyricism “Peter Knight can spin the world on his Bow”

Peter is joined by Roger Flack on Guitar and Sacha Trochet on Percussion, both powerful and intelligent musicians in their own right.