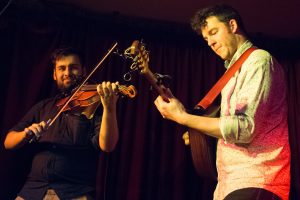 “There is a brightness to Matt’s fiddle one that lifts and soars, one that feels vibrant and affirming” Fatea Magazine

” The depth of his classical training shows in the stunning quality and musicality of his traditional fiddle playing.” Blues and Roots Radio

Living in South London and born to an Irish and Trinidadian background, Fiddle player Matt Tighe is quickly making a name for himself in the world of folk and Traditional music. Now twenty one years old, he has been described as a, “fiery virtuoso”, and has already had an extensive experience in performance, playing at many festivals and clubs within the UK and Ireland. He also has great experience in teaching music, and has taught with virtuoso accordionist, Luke Daniels for Daniels’ organization, Gael Music.

Matt was also part of the, “On Drover Tracks”, tour with Daniels, Miranda Rutter and Matheu Watson. Matt has developed his own style of playing which has been greatly influenced by his two teachers Brendan Mullcaire and Dermot Crehan as well as his frequent trips to Glasgow. Matt has won numerous awards such as the London Fiddle Champion and in 2013 was invited to play at the event and adjudicate the competition. Matt has also won numerous All Britain Championships, been a finalist in the Danny Kyle Award at Celtic Connections and been a nominee at the BBC Radio 2 Young Folk Award. His much anticipated debut album will be released in September on the Greentrax record label, having been produced by the eminent Brian McNeill and recorded in the Highlands. He studied music at the Brit School in London and continues his studies at Trinity Laban Conservatoire of Music and Dance under John Crawford.

“Tad is one of the most versatile bodhran players, accomplished backers, and knowledgeable trad musicians in the London market. But beyond his elite musical ability, his spirit of collaboration is second to none. ” Bill Barclay – Musical Director at Shakespeare’s Globe Theatre
London Born Tad Sargent, whose family roots come from Castlebar in county Mayo, started playing music at a young age on the piano. He started playing the bodhrán (the Irish drum) in 2002 after re-discovering his childhood love for Irish music.

Now a professional musician Tad has performed/recorded and worked with many great musicians and groups such as Barrule, Tony Christie, Luke Daniels, Sylvain Barou, Cara Dillon, Kristina Train, Celtic Crossroads, Joby Talbot, Ranagri, Crossharbour, Bible Code Sundays, and The Long Notes (to name a few). He was a member of Ranagri for 5 years who released an album with pop legend Tony Christie (Amarillo fame) in 2015. He is currently working on his project with the amazing Breton uilleann piper Loïc Bléjean. Their album was released in Autumn 2016. He a main member of CrossHarbour, who’s album was released in 2014.