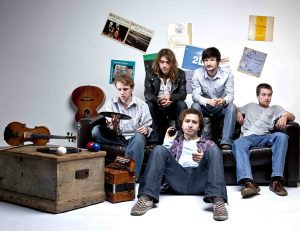 ‘A Gutsy re-working of Traditional Songs’ – The Guardian

In 2015 Mawkin delivered their self-produced and critically acclaimed album ‘The Ties That Bind’. Their ‘unapologetically energetic’ approach and DIY ethic surprised critics, fans and welcomed new audience members describing them as a ‘modern day Fairport’. With a host of rebel rousing folk songs and instrumentals the band modernise traditional folk material with their own touch and have since excited audiences with their artillery of loud, boisterous, foot stomping live sets. Critics of the album suggested that Mawkin might fill the ‘Bellowhead shaped hole’ so it seemed only natural to support them on their farewell tour of 2016 amongst a flurry of key festivals and UK tour dates.

The band members have a wealth of other musical experience between them with brothers David and James’s involvement with Eliza Carthy and Norma Waterson, Jim Moray, Topette!, and the two providing stand-in support for members of Bellowhead. Nick Cooke is Kate Rusby and False Lights’ melodeon player, is a professional mastering engineer and has worked with some of the most iconic producers in our lifetime. Lee Richardson, who’s former background was in dance music, is an award winning producer of TV, advertising and trailer music.