Witness Mike Silver singing live or on record, and you can immediately tell that here is an artist whose voice, musicianship and song-writing talents have been honed over a rich and well-lived lifetime. His easy rapport with his audiences, his endless fund of stories, plus his finely wrought songs of experience, observation and wisdom all bespeak a life-story worth many more songs and stories to come.

Tonight Mike will be launching his ‘Best of’ album in the intimate Basement venue at The Slaughtered Lamb, a retrospective look back at Mike’s long career and includes tracks from most of his previous albums, including the track which received 14 spins from Terry Wogan in 2013 – Not A Matter of Pride 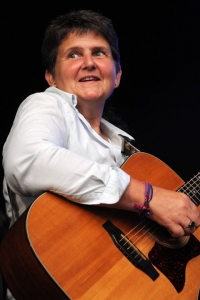 A singer/songwriter originally from London, Marina’s music crosses a number of genres. Her music has been described as acoustic, Americana, Blues, Country and folk but while it doubtless draws inspiration from all these sources her voice and style are uniquely and identifiably her own.

She has been compared to some of the best vocalists in the music world, from Stevie Nicks to Willie Nelson, Johnny Cash to Nanci Griffiths, Patsy Cline and more. Have a listen & make your own mind up about who springs to mind when you hear her sing.