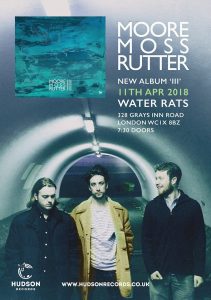 A series of remarkable gigs has heightened the sense of anticipation around the reunion of Tom Moore, Archie Churchill-Moss and Jack Rutter in the trio that won them the 2011 BBC Radio 2 Young Folk Award. Now seven years on, having toured with with some of the biggest and best acts in contemporary folk music, they now reconvene to release their third album together.

Widely regarded as three of the best players of traditional folk amongst a precociously gifted generation, their finely-crafted arrangements wield a rare potency. Their music features new compositions as well as ancient traditional material from Britain and Europe, this record focuses on their own movements from the countryside to large cities and the contrasts that come into play. Liberally sprinkled with a modern electroacoustic grit, this trio has as much to do with contemporary music as it does with folk or baroque.