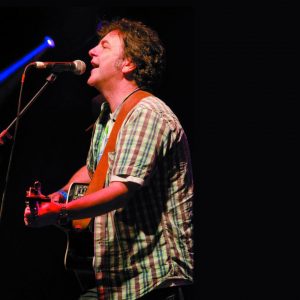 Hot on the heels of his critically acclaimed ‘partial’ autobiography “Tales From The Tracks”, knock out album “Roll To The Left” and sold out UK tour, Phil ‘Swill’ Odgers rides into town with the larger than life Bobby Valentino playing some mean violin alongside him.

Founder member and one half of the joint vocal strike force of the inimitable The Men They Couldn’t Hang, Phil “Swill” Odgers is a well loved and prolific solo artist in his own right. Audiences around the world from Cairo to Reykjavik, Brisbane to Tokyo, and Berlin to London have succumbed to his effervescent and heartfelt vocal style.
A fine acoustic guitarist, singer and songwriter, his influences are far-reaching, ranging from his Scottish roots, through 50’s/60’s rock ‘n’ roll, punk, folk and country. Phil Odgers is a sorely undervalued national treasure!

His latest solo album, the highly regarded ‘Roll To The Left’, brings his song writing prowess into sharp, bright, focus. Lyrically this is a collection of unique tales with cinematic imagery – from kitchen sink realism and social commentary to Technicolor splendour. The album was recorded in the studio built for Kirsty MacColl by Steve Lillywhite (where she recorded Fairytale of New York). Phil was privileged to record the album using to 3 very special acoustic guitars – 1 previously owned by Kirsty MacColl, 1 by Joe Strummer and the limited black edition Martin Guitar from Johnny Cash’s personal collection. It’s no surprise then that these organic, passionate and spirited sessions resulted in a magical and deeply accomplished record.

At this very special performance at the extremely fine Slaughtered Lamb in London EC1 you will have the opportunity to hear songs from this album, along with favourites from Phil’s back catalogue and even some TMTCH classics.

To make the gig even more special Phil will be accompanied by renegade virtuoso Bobby Valentino on fiddle.

The man who co-wrote and played violin on The Bluebells ‘Young at Heart’, Bobby has played on records by Bob Dylan, Tom Petty, The Alabama 3 and Paul Weller to name but a few. He has also contributed to many recordings by The Men They Couldn’t Hang as well as frequently appearing with them on stage.
Bobby’s vocal talents are demonstrated on his solo albums ‘This is Murder’ and ‘Pat-a-Cake, Pat-a-Cake’ both of which will be on sale on the night.

Phil ‘Swill’ Odgers and Bobby Valentino – what a combination!!