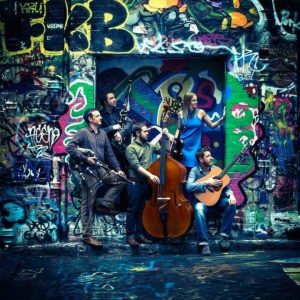 Walking away with the accolades ‘Folk Band of the Year’ and ‘Album of Year’ at the 2016 Scots Trad Music Awards was the perfect way to round off an exciting year for Scottish contemporary-folk group Breabach. Now 2017 saw them nominated ‘Best Group’ at the BBC Radio 2 Folk Awards and they are back out on tour showcasing an increasingly mature sound and live performance, whilst simultaneously building their international recognition on the world and roots music scene as one of the UK’s most dynamic and exciting bands.

Breabach unite the talent of Calum MacCrimmon (pipes/whistles/bouzouki/vocals), Ewan Robertson (guitar/ vocals), James Mackenzie (pipes/flute/whistles), Megan Henderson (fiddle/vocals/stepdance) and James Lindsay (double bass). Since launching their career as winners of the Open Stage Award at Celtic Connections in 2005 the band have steadily moved from strength to strength, picking up accolades and performing at esteemed events along the way. 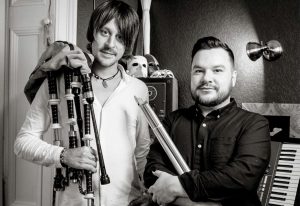 Best Duo in the 2017 BBC Folk Awards, Ross Ainslie and Ali Hutton, internationally recognised multi-instrumentalists, composers and arrangers in the vibrant and ever evolving Scottish traditional music scene, have come together in an eagerly awaited collaboration to create their stunning new album ‘Symbiosis’. Ross and Ali have a long history of shared musical roots from their days with the Vale of Atholl pipe band, at the age of 12. They were mentored by one of the most innovative pipers in the last
30 years, the late great Gordon Duncan. Gordon sparked a deep passion in Ross and Ali for playing pipes with other instruments and they went on to be founding members of the musical powerhouse Treacherous Orchestra as well as playing with bands such as Old Blind Dogs, Salsa Celtica, Dougie Maclean, Shooglenifty, Zakir Hussain, The Levellers and Capercaillie.