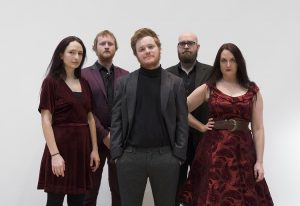 Shake the Chains – a touring commission of new and classic protest songs,

“Eclectic and adventurous…. A classy affair”- The Guardian ****

“Moving, pertinent, and a clear sign that the UK folk scene does retain a political impetus”- RnR magazine

Shake the Chains is one of the most timely and exciting new music commissions of 2017. In a year of unprecedented political upheaval, an enviable cast of five of the best contemporary folk singer songwriters and musicians came together to explore and celebrate the role songs play in social change, resistance and protest.

Shake the Chains is a commission from Folk by The Oak with support from Arts Council England, Help Musicians UK and Folk Alliance International.

Nancy Kerr is one of the most in-demand singer songwriters in English folk. She has won six BBC Radio 2 Folk Awards, including Singer of the Year (2015), Best Duo as part of Nancy Kerr & James Fagan (2000, 2003 & 2011), and Best Album & Best Group as part of The Full English Band (2014). An exceptionally gifted musician, singer, and generous collaborator, the last three years have seen her create a strong body of new songs across a range of subjects following her involvement in The Elizabethan Session and Sweet Liberties.

Findlay Napier made his name touring and recording with multi-award winning traditional Scottish folk band Back of the Moon. In 2015 he collaborated with Boo Hewerdine on a project called VIP: Very Interesting Persons. The project, which spawned an album, EP and book, received rave reviews and was #2 Folk Album of the Year 2015 in The Telegraph. His body of work shows songs that connect with the subject matter in unique ways, and that explore the stories and lives of the people involved in each narrative.

Hannah Martin, half of a BBC Radio 2 Folk Award winning duo with Phillip Henry, is a skilled and versatile musician with a contemporary outlook and style of folk and roots music. Her inspiring songwriting charts a range of historical and modern social issues.

Politics graduate Greg Russell performs as a duo with Ciaran Algar, but also as a solo artist and with Nancy Kerr’s Sweet Visitor Band and The Tweed Project. The winner of two BBC Radio 2 Folk Awards in 2013 & 2014, and nominated in 2015, he is one of the finest and most versatile young artists in English folk music. A dissertation on the role of protest song was the spark for the project that has become Shake the Chains.

Tim Yates is a member of Blackbeard’s Tea Party and Nancy Kerr’s Sweet Visitor Band and in demand as one of the best ‘side-men’ in the UK folk scene for his versatility as a musician. He is an exceptionally gifted arranger and collaborator, and highly regarded as a writer. 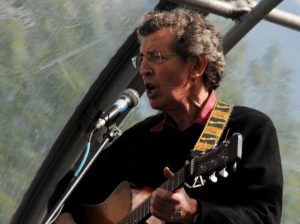 In the early days of the folk revival, he was a member of the Galliards with whom he made numerous radio and TV broadcasts and concert appearances. He started writing songs seriously (and humorously) in the early 1960s and hasn’t stopped yet. ….

He has performed in every conceivable venue around the country and toured North America, Holland, Belgium, Switzerland and Australia. He has written songs and scripts for Inter-Action’s Dogg’s Troupe and the Fun Art Bus, songs for a stage production at the Crucible Theatre, Sheffield, of They Shoot Horses, Don’t They? and shows for performance with Roy Bailey and Frankie Armstrong, including the anti-nuclear No Cause for Alarm.

Hailed as the political voice of a generation, singer-songwriter Grace Petrie has emerged in recent years as one of British folk’s most powerful new stars. A vocal powerhouse with a truly exceptional gift for lyricism, she articulates life, love and the modern struggle with blistering honesty, while the warmth and wit of her delivery has charmed audiences both sides of the Atlantic. She has racked up a genre-defying CV of festival appearances from Glastonbury to Vancouver Folk Festival, as well as touring extensively alongside Robin Ince, Josie Long and Billy Bragg. She is a member of the highly respected collective The Anti-Capitalist Roadshow, featuring Leon Rosselson, Peggy Seeger and Roy Bailey, and is one third of the feminist folk supergroup COVEN. She has been a regular musical guest on BBC Radio 4’s The Now Show. Her latest record, Heart First Aid Kit, was one of MOJO magazine’s top 10 folk albums of 2017.