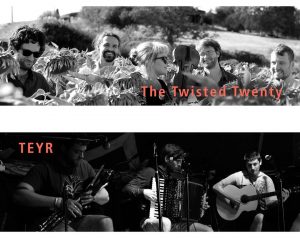 The Twisted Twenty
Described as “..a hot toddy for the and a summer’s day for the mind..”, The Twisted Twenty take 18th century folk musics and using original period instruments, forge a new sound for the 21st century. Comprising of some of the UK’s most talented classical and folk musicians, their debut album was released to great acclaim in 2017 on Penny Fiddle Records.

TEYR
Folk trio TEYR evolved out of London’s thriving session scene, combining bothy ballads, focsle shanties, folk tunes and Irish poetry. Their unique blend of voices and instruments draws links between the many sounds of the Celtic and British isles. Featuring close vocal harmonies, fiddle, uilleann pipes, guitar, low whistle and accordion, and influenced by the great folk musicians who’ve come before, TEYR (‘3’ in the Cornish language) have honed their craft and thrive on weaving their diverse threads together.