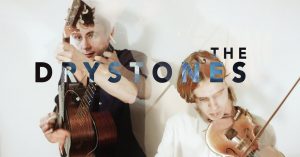 “If you are looking for traditional music delivered with creativity, passion and skill this is the album for you.” – Andy McMillan, Bright Young Folk

“To describe their instrumental style as spirited and animated would be akin to asserting that Bellowhead can be quite an energetic band” – Clive Pownceby, Living Tradition

The Drystones (Alex Garden and Ford Collier) are two fine and talented emerging Folk Musicians. Somerset based they started out arranging lively jigs played on Guitar, Fiddle and Whistle and then emerged on the scene with storming sets at Priddy Folk Festival and continuing on to perform at such festivals as Sidmouth Folk Week, Bath International Music Festival, Warwick Folk Festival, Bromyard Folk Festival, The Village Pump Festival, and Purbeck Folk Festival to name a few.

2017 saw their third album “We Happy Few” released to great acclaim. It was produced by Will Lang (known for his collaborations, Nitin Sawhney, PBS6, Halsway Manor) and this time was recorded by Julian Batten at the Loft Music studios in Newcastle (Julian has worked with KAN, Kathryn Tickell, Bella Hardy and The Elephant Sessions).

2018 started with being nominated for the BBC Radio 2 Young Folk Awards which takes place in Belfast in April during which time they will be touring the the UK as far north as Scotland to promote their latest Album. In the past The Drystones have supported Ray Davis, Steeleye Span, and The Elephant Sessions, Seth Lakeman at Sidmouth and Martin and Eliza Carthy at Cecil Sharp House.