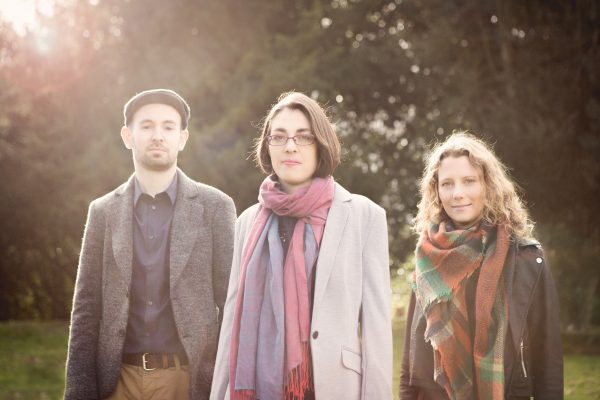 Tonight will be the London Launch of the new Foxglove Trio EP!

The Foxglove Trio seek out lesser-known traditional and contemporary folk songs and, with care and creativity, transform them into moments of breathtaking beauty.

Their Christmas folk song collection comes from the trio’s Welsh and Yorkshire homes, with additional gems from the Hebrides and the Midlands.

As you would expect from a collection by The Foxglove Trio, these carols have been imaginatively and sensitively arranged to bring a touch of warmth to the coldest of winter days.

“A fresh, modern folk sound… This is a group that uses tradition in the best way possible – to create something new and beautiful.”  Songlines (Tim Woodall) ****

“The Foxglove Trio are one of the most distinctive of today’s young ensembles. A truly enchanting release all round.” fRoots (David Kidman)

Brown Boots! is Will Allen on melodeon and Martin Clarke on fiddle. Their musical background is rooted in playing music for dancing, as well as gaining inspiration from playing with their many talented musical friends at festivals and pub sessions across the country. Although they are at home on any stage, they love performing in more intimate venues, where the audience can really get immersed in the acoustics and movement of the instruments.

Will Allen is a supremely talented multi-instrumentalist, although his primary focus is as a melodeon player and fiddler. He performs an extensive repertoire of folk dance tunes, mostly from the British Isles. His music takes influences from all corners of Western Europe and he has developed a unique take on traditional tunes.

In 2015 he was shortlisted for the BBC Radio 2 Young Folk Award Competition. Will is also a proud member of electrifying ceilidh band Urban Folk Theory. with which he has performed at some of the UK’s biggest folk festivals.

Martin Clarke is a highly-skilled fiddle player, with musical roots in the North East of England, stemming from his time studying at Durham University. He plays music from across the British Isles with influences from the continent. He also has an interest in North American music traditions.